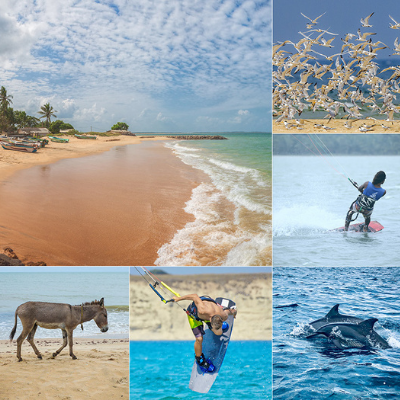 Kalpitiya region is one of the most beautiful coastal areas located in the Western Province of Sri Lanka. The largest coral reef in Sri Lanka (‘Bar reef’) is only an hour’s boat trip from Kalpitiya. Kalpitiya is the hottest spot to watch Dolphins in Sri Lanka.
Dolphins and kitesurfing are what bring people to the Kalpitiya peninsula. Schools of dolphins hundreds strong can often be seen jostling and playing in the offshore waters and boat safaris offer close-up views of these aquatic mammals. Meanwhile, for those who want to act like a dolphin dancing through the waves, Kalpitiya, with its near constant strong winds, is widely considered to have the best kitesurfing conditions in South Asia.
Until recently, this was an intensely rural backwater that saw very few visitors. But it’s not just thrill seekers and nature lovers who’ve discovered Kalpitiya. The government, looking to expand the island’s tourist industry, is engaged in a project to turn the peninsula and its string of offshore islands into one of Sri Lanka’s prime beach tourism destinations. The blueprints call for investment in projects as diverse as luxury accommodation for over 10,000 people, a domestic airport, theme parks, an underwater amusement park (!), golf courses, high-speed boat safaris and much more. Environmentalists are concerned about the impact these projects will have on the populations of dolphins, sperm whales and dugongs which use the waters around Dutch Bay.
More importantly, though, a large number of local people are concerned that their needs are being overlooked in favour of grandiose tourist developments. In addition to the banning of fishing in certain areas, they also have concerns about the development process itself (the minister of economic development has admitted that land deeds have been forged in some places). According to the independent Sri Lankan body the Law and Society Trust, there is, among other issues, a ‘lack of transparency and duplicity in the state’s process of land acquisition’, a ‘violation of land tenure rights and customary rights’ and ‘forceful land acquisition, violation of private ownership, and illegal land grabbing taking place in Kalpitiya area’.
However, considering the windy beaches, the tendency towards overpriced accommodation and the relatively brown waters of Dutch Bay and the surrounding ocean (in comparison with the crystal blues of the south coast), we do wonder if it will all turn into a bit of a white elephant.