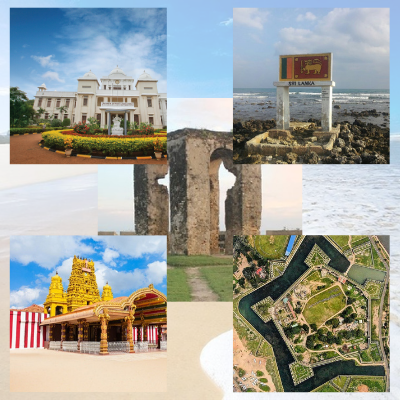 The City of Jaffna is the capital city of the Northern Province of Sri Lanka. Majority of the city’s population are Sri Lankan Tamils. Jaffna city was established as a colonial administrative center by the Portuguese colonials in 1621.
Slowly but surely reemerging as a bastion of Hindu tradition, art and creative culture, Jaffna is once again welcoming visitors and looking to rise again. It’s an intriguing, unimposing and mostly untouristed place that’s a thoroughly rewarding place to invest a few days discovering Sri Lankan Tamil culture.
Inescapably, decades of war, emigration, embargoes and loss of life and property have deeply affected this historic Tamil town. If you’ve just arrived from the south, the impact of all this is all too evident, with ruined homes, bombed churches, and civic buildings pockmarked by bullets and shrapnel very much part of the scene. Around one in five of the city’s structures suffered war damage. The military retain a strong presence and locals complain about harassment and infringement of property as well as livelihood. Peace and reconciliation are still works in progress.
As refugees and exiles return to rebuild the city, confidence and finance is returning. The city is surprisingly green and leafy, with attractive palm-shaded colonial-era suburbs and beautiful temples and churches. Physically, new structures (including the city’s first shopping mall) and upgraded road, rail and air connections are inspiring optimism. But you’ll appreciate Jaffna more for its insights into the Tamil people and their struggle than for any specific points of interest.
The city is also an ideal base for forays to the idyllic islands just to the west, and trips along the coastline and lagoons of the surrounding peninsula.