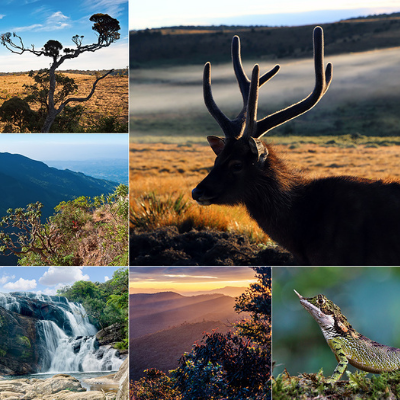 Horton Plains National Park is a protected area in the central highlands of Sri Lanka and is covered by mountains grassland and cloud forest. The sheer precipice of World’s End and Baker’s Falls are among the tourist attractions of the park.
Horton Plains is a beautiful, silent, strange world with some excellent hikes in the shadows of Sri Lanka’s second- and third-highest mountains, Kirigalpotta (2395m) and Totapola (2359m). The ‘plains’ themselves form an undulating plateau over 2000m high, covered by wild grasslands and interspersed with patches of thick forest, rocky outcrops, filigree waterfalls and misty lakes. The surprising diversity of the landscape is matched by the wide variety of wildlife.
The plateau comes to a sudden end at World’s End, a stunning escarpment that plunges 880m. Unless you get there early the view from World’s End is often obscured by mist, particularly during the rainy season from April to September. The early morning (between 6am and 10am) is the best time to visit, before the clouds roll in. That’s when you’ll spy toy-town tea plantation villages in the valley below, and an unencumbered view south towards the coast. In the evening and early morning you’ll need long trousers and a sweater, but the plains warm up quickly, so take a hat for sun protection. The weather is clearest January to March.