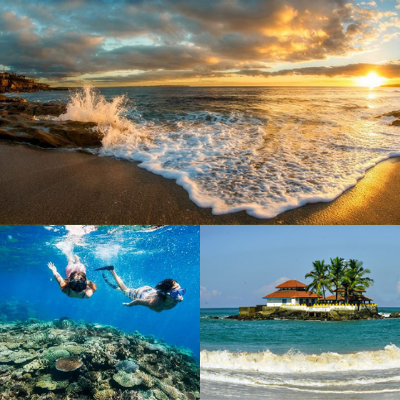 Hikkaduwa is a small town on the south coast of Sri Lanka. It is located in the Southern Province, about 17 km north-west of Galle. Hikkaduwa is famous for its beach, surfing, corals and night life.
Hikkaduwa has been a firm fixture on the Sri Lankan tourist map since the 1970s. This long exposure to international tourism has left it a little worse for wear. Uncontrolled and unplanned development has meant that the swaying palms of yesteryear have given way to an almost unbroken strip of cheap guesthouses and restaurants that vie among themselves to be the closest to the lapping waves. This in turn has led to terrible beach erosion, and in parts the once-famous sand has now been almost completely replaced with sand bags fighting a vain battle to retain what little beach remains (although in recent years sand does seem to be beginning to return to large parts of the beach – a trend we can only hope continues). To make matters worse, the appalling Colombo–Galle road, with its asphyxiating smog and crazy bus drivers, runs right through the middle of it all, which can make stepping outside of your guesthouse as deadly as a game of Russian roulette!
Bad as it sounds, though, there are glimmers of hope. There’s an increasing range of activities on offer and more and more higher-class places to stay and eat. Finally, and maybe most importantly, at the time of research there was much talk about a possible new bypass road around the edge of Hikkaduwa, which would do much to bring a semblance of peace and tranquillity back to this paradise lost.