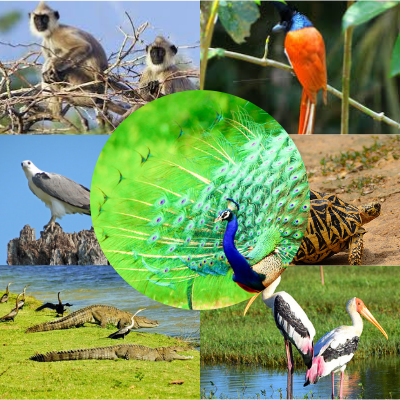 Bundala National Park is an internationally important wintering ground for migratory water birds in Sri Lanka. Bundala harbors 197 species of Birds, the highlight being the Greater Flamingo, which migrate in large flocks.
Much less visited than nearby Yala National Park, Bundala National Park is a fantastic maze of waterways, lagoons and dunes that glitter like gold in the dying evening sun. This wonderland provides a home to thousands of colourful birds ranging from diminutive little bee-eaters to memorably ugly open-billed storks. It shelters almost 200 species of birds within its 62-sq-km area, with many journeying from Siberia and the Rann of Kutch in India to winter here, arriving between August and April (December to March is the peak time). It’s also a winter home to the greater flamingo, and up to 2000 have been recorded here at one time.
Bundala National Park also has a small but very visible population of elephants (between 15 and 60 depending on the season, December is the best month), as well as civets, giant squirrels and lots of crocodiles. Between October and January, four of Sri Lanka’s five species of marine turtles (olive ridley, green, leatherback and loggerhead) lay their eggs on the coast.
Bundala stretches nearly 20km along a coastal strip between Kirinda and Hambantota. Most people access the park (and hire jeeps) from Tissamaharama and Kirinda; jeep hire rates and details are the same as for Yala. Unlike Yala, Bundala is open year-round, allowing wildlife junkies to get a wet-season fix. There’s a breezy visitors centre at the main gate which has views over the marshes; check out the skeleton of a fearsomely huge crocodile.
There’s no accommodation in the park itself and most people stay in Tissamaharama. The Lagoon Inn is a friendly homestay on the edge of the village of Weligathta (halfway between Tissamaharama and Hambantota) and an excellent alternative base for the park as it’s only 2km from the park’s northern entrance gate. The upstairs rooms overlook the marshes, allowing you to birdwatch without leaving your seat. The owner is an experienced birdwatcher who organises park tours.