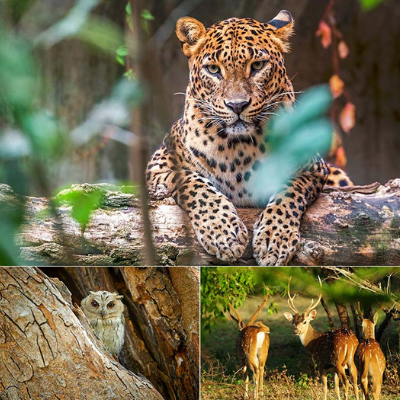 The unique feature of this park is the existence of “Willus” (Natural lakes) Located in the Northwest coast lowland dry zone of Sri Lanka.Wilpattu is among the top national parks world renowned for its Leopard population.
Wilpattu means ‘natural lakes’ in Sinhala and ’10 lakes’ in Tamil and lakes are exactly what you’ll find at Wilpattu National Park, which at 1085 sq km is Sri Lanka’s largest national park. As well as lakes you’ll also find huge swathes of dense, dry country woodland, masses of birds and, with a little luck, an impressive array of wildlife including leopards (this is the second-best park after Yala for leopards), sloth bears, spotted deer, wild pigs and crocodiles.
A safari in Wilpattu is very different from any of the other major national parks. Visitor numbers remain very low and even in high season it’s common for there to be no more than a handful of tourist jeeps in the park at any one time. This gives Wilpattu a wonderful, and genuine, wilderness feeling. On the flipside though, the dense forest and general skittishness of the animals means that actually sighting wildlife is less of a sure thing than in the country’s more visited parks. This is truly a place for the more dedicated safari-goer. Birders in particular will love Wilpattu with its abundance of dry forest, water and even coastal birds.